Infographic: Total and per capita NIH award funding by state

Posted on August 3, 2014 by Alexander Szewczak

Mid-way through 2014, California currently leads the nation with $2.1 billion in National Institutes of Health (NIH) award funding, while Massachusetts and New York are ranked 2nd and 3rd, with about $1.4B each.  Not surprisingly, Massachusetts — much smaller in size and population — has far and away the most concentrated NIH funding per capita, currently at $218.  That’s about 4 times California and 3 times New York, and a big reason for the strength of the Cambridge/Boston biotech hub. 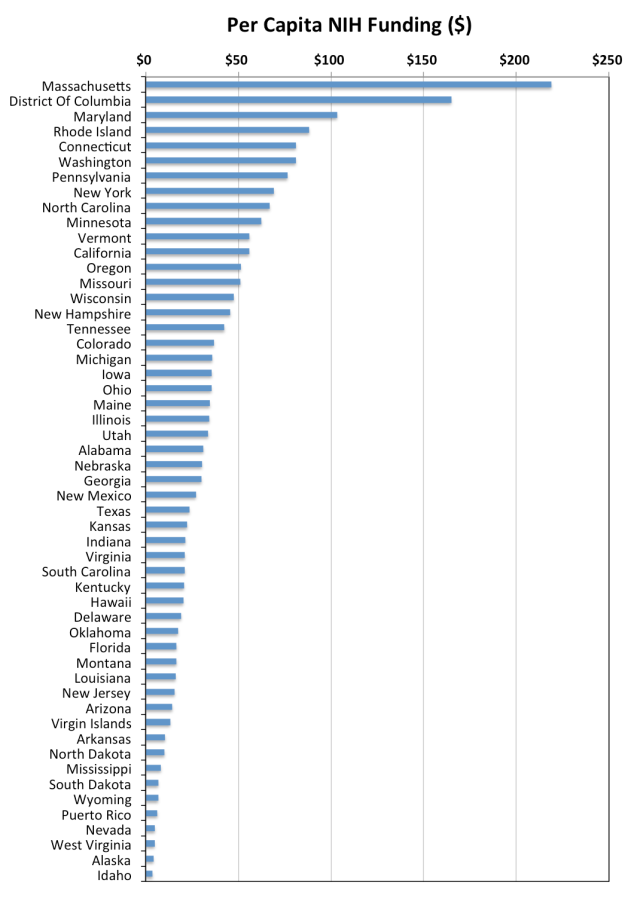 [Update:  Note that these figures from the NIH are 2014 year to date. Full year 2103 data can be found in the Data Center]

Outliers: The District of Columbia has a relatively small amount of NIH funding ($107 million), but only 650,000 people, hence per capita spending of $165.  NIH intramural funding at the Bethesda medical research campus is not included in this data, and would raise the Maryland total and per capita funding numbers somewhat.

Like Loading...
This entry was posted in Biotech, Pharmaceutical Industry, Research and tagged National Institutes of Health, NIH Funding. Bookmark the permalink.