Handwriting vs. Typing: The Pen is Still Mightier Than the Keyboard

Posted on December 17, 2014 by Alexander Szewczak 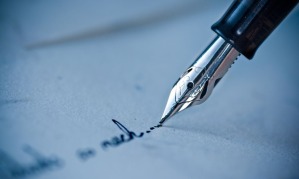 As keyboard typing (or scrawling on a tablet with a clunky stylus) takes over, evidence suggests that learning with old fashioned handwriting provides important cognitive benefits. Typing, in contrast, distracts your brain with the mechanical task of replicating content — making it hard for your brain to summarize and process the material.

In a paper published in April in the journal Psychological Science, two US researchers, Pam Mueller and Daniel Oppenheimer, claim that note-taking with a pen, rather than a laptop, gives students a better grasp of the subject.

The study focused on more than 300 students at Princeton and the University of California, Los Angeles. It suggested that students who took longhand notes were better able to answer questions on the lecture than those using a laptop. For the scientists, the reason is clear: those working on paper rephrased information as they took notes, which required them to carry out a preliminary process of summarising and comprehension; in contrast, those working on a keyboard tended to take a lot of notes, sometimes even making a literal transcript, but avoided what is known as “desirable difficulty”.

That “desirable difficulty” is otherwise known as learning.  Handwriting, diagramming, or sketching all let your brain process what you’re learning, in a way that typing or watching videos don’t.  (Watching videos coupled with hands on learning does work, in my experience, but the key part for digesting and internalizing information is the hands-on part.)

Like Loading...
This entry was posted in Education, Information Technology and tagged electronic learning, handwriting, keyboard. Bookmark the permalink.

1 Response to Handwriting vs. Typing: The Pen is Still Mightier Than the Keyboard