The cold, thin atmosphere of Pluto

Posted on August 13, 2015 by Alexander Szewczak

Pluto’s thin atmosphere is mainly nitrogen, and leaking away from the planet at a significant rate.  Scientists speculate that cryovolcanic activity is continually releasing enough new nitrogen vapor to keep the atmosphere from completely dissappearing.

Cryovolcanic.  That’s a term you don’t hear every day.  Significant areas of Pluto are covered in what looks like glaciers.  But they’re not made of ice — ice is too hard to flow at Pluto’s  -370F temperature.  Instead, the glaciers — which show hints of convection patterns  — are likely made of frozen nitrogen: 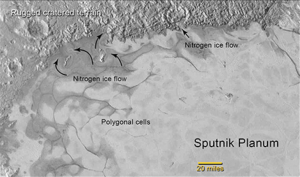 Cryovolcanism.  Just had to say that one more time.  You can read more at the New Horizons mission web site.

Like Loading...
This entry was posted in Space & Astronomy and tagged NASA, New Horizons, Pluto. Bookmark the permalink.

1 Response to The cold, thin atmosphere of Pluto